Having had the great pleasure of visiting the centre of Andalusia, in south-west Spain in the beautifully scenic Cordoba province – in and around the Montilla-Moriles wine region late in September 2015 – I quickly changed my perception of the wine produced in “Montilla” – from a sort of cheap version of the famous fortified wine “Sherry” (as produced in Jerez de la Frontera and its surrounding area) – as being akin to Sherry, but with two very distinctive and fundamental differences.

Similarities of both Sherry and Montilla are that the Palomino (for Sherry) and Pedro Ximenez (for Montilla) grape varieties grow in albariza soil (which resembles chalky sand-like covered clay) and the styles of Fino, (pale and dry) Amontillado (amber and dry or medium dry) Oloroso (dry, dark, rich and nutty) and in certain rare cases Palo Cortado (subtle cross between a dry Amontillado and a delicate rich Oloroso) are produced.

Although some Sherry producers make their own “Pedro Ximenez Sherry” (dark, round, rich & superbly sweet), the majority of the PX grapes emanate or are sourced, by Sherry producers, from Montilla. 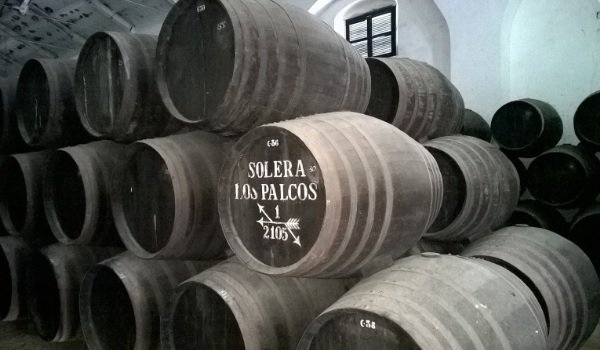 In all – next year in April we have a treat in store – for “food and wine lovers” in two parts – firstly in Sherry country (centred in Jerez) and secondly in Montilla-Moriles country (based in Cordoba).

The 1st part of our proposed visit to Andalusia (Andalucia in Spain), starts in the Hotel Sherry Park, Jerez for a welcome dinner – on Sunday 17th April followed by a 2 day tour of the Sherry Triangle (covering Sherry bodegas in El Puerto de Santa Maria, Sanlucar de Barrameda and Jerez de la Frontera – being the three towns in the Sherry Triangle) and the 2nd part being a superb “food and wine-tour” c/o our friend Rosa Lara in the Montilla region – starting by either making your own way to Cordoba or joining our minibus trip to Cordoba from Jerez (about 2.5 hours away) on Wednesday 20th April in time for lunch. Afterwards, we’ll tour round the incredibly beautiful Mosque, before seeing a spectacular evening Horse Show and dinner out.

During the remaining three days, visits will include wineries with wine tastings, an Olive Oil producer, an Iberian ham factory, a cheese tasting and a pairing lunch with local organic wines – ending with a “farewell Moscatel drink” at El Pimpi (a popular restaurant & bar) early evening on Saturday 23rd April in Malaga.

Judging by interest shown in the past, early bookings are essential.