A large band of crickets serenaded us as we tucked into our delicious starter of huge, tender, mussels in an olive oil and lemon sauce. Zephiros caressed our cheeks with a gentle, cool, breeze that turned the temperature of Greek summer sun to something just perfect. A couple of hundred yards away children splashed in the still blue sea.

A glass of Malagouzia was poured. We sniffed and swirled and sniffed some more We clinked glasses and said “Geia mas”. We brought our glasses to our lips. That was the final touch. I was in heaven in a way I only experience in Greece. 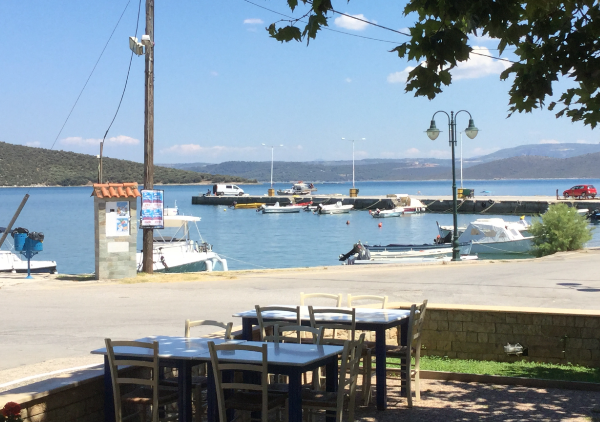 Malagouzia is one of the many Greek grape varietals. Many English people will only speak of Retsina when asked about Greek wine. Others will have progressed to knowing about Greece’s three most exported varieties: Assyrtico, Xinomavro and Agiorgitiko. Yet Greece  offers a vast panoply of wine beyond these and enthusiastic winemakers work their magic on them to produce some extraordinary wines which reach the shores of far and distant lands including, the U.K., the USA, but also China and Japan. Numerous are their prizes in international wine competitions. At a recent visit to Avantis, a charming family winery in Boeotia, I was struck by the absence of bronze medal certificates. They were nearly all silver and gold and in one case “double gold”.

As I write I am traveling on a ferry from Patras to the Ionian island of Kefalonia. It is my first moment of rest the last few days in this rather busy trip to Greece, researching two new wine tours for next year: One planned for Crete,  based near Chania, the other near Atalanti in Boeotia. This is the home of Hadzimichalis, one of the foremost Greek winemakers and one who played a major role in leading Greece to become a producer of quality wines of world repute.

Join us on the next wine tour?

In Crete my first visit had been to the Dourakis Winery. Here I got to taste one new varietal after another – new to me that is. First was a Vilana. This was actually not completely new to me as I had tasted one from Boutari a few days ago, but the Dourakis Rizitis made from Vilana was superb. Even more superb was their Linhos from the Vidiano grape. We then had a Malvasia Aromatica. Malvasia is quite popular in Greece and Malvasia Aromatica is a sub-variety of it. Then we had another new varietal, the Kotsifeli grape blended with Syrah – a lovely red wine. Finally, a Romeiko Liasto, a naturally sweet wine from sun-dried grapes. It had lovely aromas of roses and orange blossom and although I am not a great fan of desert wines, I really loved this one for its not being too sweet.

Dourakis is definitely one of the wineries that is to be visited in our planned wine tour in Crete, hopefully next year. They habitually do a number of exciting wine events such as wine and food pairing dinners. An event I discussed with Douroudakis that I would like to incorporate in a forthcoming tour is a wine-tasting picnic. I organized one such in Cyprus and several participants said it was the highlight of their tour.

My next winery visit in Crete was at Alexandra Manoussakis winery. I singularly failed the intelligence test of getting there on time and got lost in olive groves, but that is one of the reasons why we research tour possibilities before running them.

What is fascinating about Manoussakis is that it is a family winery developed over three generations, starting from nothing by the grandfather and developing into a top winery winning multiple international awards. It was interesting to see the press they used for the first wines they produced and the press they use now, one of the largest and most sophisticated in Greece.

Greek Wine Kaleidoscope – A wine aficionado shares the excitement felt by a stamp collector finding a rare stamp. I have to say that on touring the winery, I was really excited by their Grenache which won an award for best Grenache in Europe. This is incidentally, mostly a wine used in blends, but some wineries make varietal wines of it. This is particularly prevalent in Sardinia. Here at Manoussakis we had a truly wonderful Grenache varietal wine.

As many of my readers will know, I live in Cyprus. We have showing on both Greek and Cyprus TV a programme called “Brousko” about two winemaking families in Cyprus and in Crete, the latter based in Chania. I have seen the harbour so many times on the TV series, I found it quite interesting to see it in real life. But even without that special interest, I think that Chania makes an interesting base for a wine-tour. It is a picturesque old town with really buy restaurants lining the Port.

Join us on the next wine tour?

Greek Wine Kaleidoscope – Next day it was a flight to Athens then a drive up to Livanates where I was to spend the next three days exploring the  wineries of Boeotia. That will be the subject of a second blog. In this I will tell you the story of Mouhtaro, the grape variety to be used by only one winery in Greece (the world even), of Hadzimichalisthe winery that played an important role in launching Greece into the league of top wine producers, of Avantis named after the Avantes warriors of Boeotia, of theKaradimos family said to produce the very best Malagouzia. All following on soon.