Why Rioja is such a popular destination 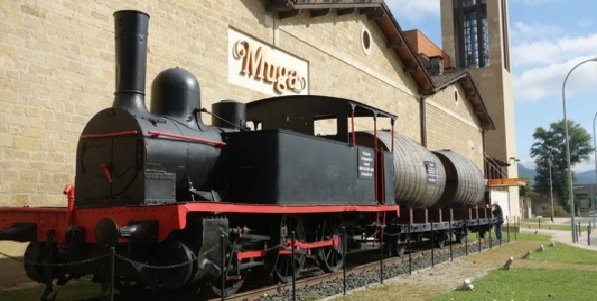 Outside Muga Winery remains a relic of the past, one of the steam engines that regularly used to pull trainloads of wine to Bordeaux.

Rioja Wine Tours are popular with enthusiasts looking for a Wine-Tasting Holiday. Here’s why:
In part it’s down to Phylloxera – the vine plague that struck Europe in the 19th century. France was one of the first countries to be struck and many successful Bordeaux producers came and set up shop in Rioja. A little earlier, many Rioja producers had been going to Bordeaux to study the renowned French wine-making techniques. So from both directions the quality methods of top French producers were grafted onto the superb geological conditions for vine growing to be found in the Rioja region. 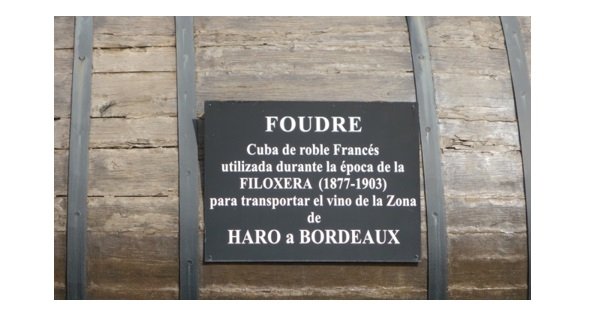 A sign on one of the wagons reminds us of the way Haro supplied wine to Bordeaux in the Phylloxera years 1877-1903.

The French connection became so strong that a railway was built to enable wine to be taken straight from Rioja to Bordeaux by train. In the village of Haro, for example, this early long-distance railway had a station within yards of the major wineries.

So there is a tradition of quality that draws wine-lovers to the area. Rioja wine, though famous the world over, particularly appeals to the English palate.

Another appeal of Rioja is its history. One can read about it, but it is quite different to see first-hand how such quality wines evolved in the region. Many of the wineries to be visited on a wine-tour are absolutely steeped in history.

A third reason is the sheer magnificence of the landscape – vast plains painted by intense light on a panoply of colour and walled by the majestic mountain ranges of the Basque Country. Drink giants like Ricard have large estates here, but for us it is generally the smaller producer that interests us; he is generally the producer that thrives on a passion for producing superb wines. Looking at acre after acre of fields and VAT after VAT of wine, one has to acknowledge that they are perhaps not that small, but small enough to be run as a family concern.

Take Ruiz de Vinaspre for example. It is run mainly by three women: Charo Alegre Ruiz and her two daughters Jaione and Ainhoa. “Not very Spanish–sounding names,” you might think. That is because they are not Spanish names but Basque ones. Rioja is in Basque country.

Charo, as well as being general manager, is an excellent cook and serves up fantastic meals at the winery. When “Wines and Tours” run a tour there, we consider a lunch at the winery a must. All three of the ladies have a bubbly personality and the winery tour and lunch are a truly delightful experience.

A fourth reason for the popularity of Rioja as a region to choose for a wine tour holiday is that it is relatively quick and inexpensive to travel there. For example, if you were coming on the Wines and Tours Rioja tour, in September (21st to 25th Sept)  you could fly with Vueling from Gatwick to Bilbao the night before, ie on the 20th,  for €39.99 and return from Bilbao on the 25th at 17h30 for €89.99.

A fifth reason lies in the numerous possibilities of adjoining travel. You could stay longer and carry on to other regions of Spain. You could even stay with Wines and Tours and join them on their Navarra wine tour immediately after. Or you could have come on the Wines and Tours Portuguese tours and come up the Douro River to Spain stopping at Quintas (Portuguese wine estates) along the way.

When we went to research Rioja as a region for a wine tour we envisaged a tour of a day, possibly two. We soon decided that it was too interesting a location to see in such a short time and we are really delighted with our start of a Pincho Bar crawl with a Wine Educator.