Our newly created 2-part “wine and food week in Andalusia” last month was a resounding success!

Initially based in the aptly named Hotel Sherry Park, for the first 3 nights in Jerez de la Frontera, we greeted our party of four, in the hotel on Sunday 17/04 prior to dinner in the hotel at 21:00.

Our guests, Dr Mel & Awen Jones and their friends Dr Keith & Sue Griffiths had been travelling from an early hour – initially from their homes in North Wales by car to Manchester airport to catch their flight to Malaga, duly arriving on time at 10:00 that morning. Their onward journey to Jerez de la Frontera was in a hire car, via Ronda for lunch (carefully planned as a one-way trip, as Europa car hire use Hotel Sherry Park as a holding point, for their cars)!

Duly on Monday (18/04) morning, our English speaking driver-guide, Raul (pronounced Ra-oul), arrived in good time to drive us to Puerto de Santa Maria (west of Jerez, near Cadiz on the Atlantic coast).

El Puerto, being set on the Costa de la Luz, is an ideal part of Andalusia for people who want to enjoy the sun, the sea and outdoor sports. The beach bars there offer an abundance of the area’s rich seafood, with views of the Atlantic and where a Sherry, with its own Denomination of Origen, can accompany any of the food.

Being passionate about his country and the Jerez region, Raul pointed out various landmarks and the whitewashed buildings of various Sherry producers, like Bodegas Caballero, Bodegas Terry and Bodegas Fundador Pedro Domecq. Before visiting Bodegas Osborne, www.osborne.es we stopped outside the bullring – depicting typical Spanish architecture: 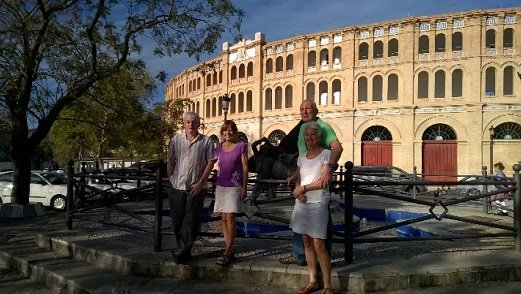 During the latter part of our tour in Bodegas Osborne, (c/o our guide Anna-Marie) we were joined by Carla Terry Osborne (a member of the 7th generation of the Osborne family), who had recently joined the family firm and was gaining experience.

After our tour of Bodegas Osborne, we tasted their excellent Sherries, starting with Fino Quinta followed by their 10RF Medium Oloroso, Bailen Oloroso, Santa Maria Cream and finishing with their really lusciously excellent 1827 Pedro Ximenez – smiles all round: 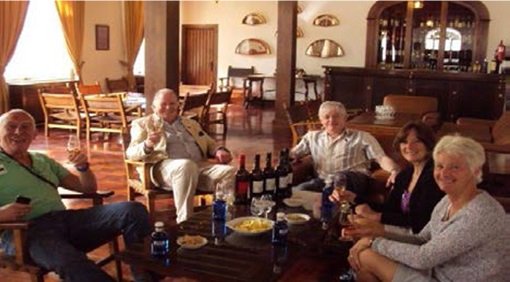 Later we drove to Sanlucar de Barrameda (north of El Puerto) to visit Bodegas Hidalgo c/o Javier Hidalgo – famed for producing fine Manzanilla Sherry – their main brand being La Gitana (the gypsy, in English). For connoisseurs who might prefer a more sophisticated Manzanilla style, his Pasada Pastrana Manzanilla is superb.

Javier Hidalgo always carries his own Venencia, honed from bamboo. 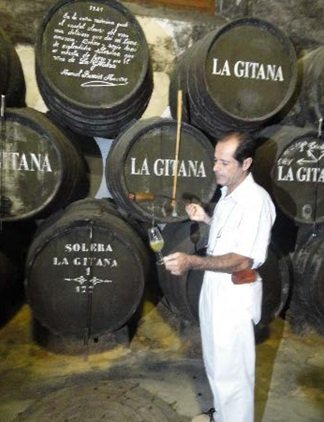 On Tuesday (19/04) morning, which was dull & overcast, we visited Bodegas Tio Pepe at Gonzalez Byass in Jerez which was very busy with scores of noisy school children and really quite different to the other two more personalised visits. Soon thereafter, we briefly sampled Tio Pepe (probably the best Fino in the world) and a couple of other Sherries before leaving, as it began to rain. Prior to a light lunch in the Parador de Arcos, we visited the famous clock museum in Jerez (once part of the Rumasa group).

Afterwards we returned to Hotel Sherry Park to relax before an excellent farewell (to Jerez) dinner in El Cartujano restaurant, within Hotel Jerez www.jerezhotel.com about ten minutes’ walk away.

Shortly after breakfast on Wednesday (20/04), our journey to Cordoba (for part 2) went to plan and after a tasty lunch near Hotel Posada de Vallina, (accommodation for the nights of 20th, 21st & 22nd April) we were visiting the famous Cordoba Mosque-Cathedral opposite, purported to have over 600 pillars, some are evident in the picture, below: 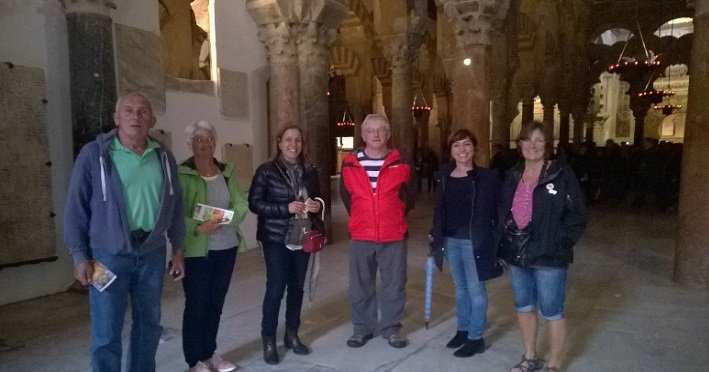 Bodegas Grupo Perez Barquero see; www.perezbarquero.com c/o Adela Cordoba Ruz, (daughter of the owner) who guided us through the process from grape to bottle, followed by a delicious tasting of five of their wines – being, Vinaverde (fruity white made from Pedro Ximenez blended with Airen & Moscatel grapes), and Montilla’s Fino, Amontillado, Oloroso and the deliciously sweet Pedro Ximenez, as per the bottle images, shown below: 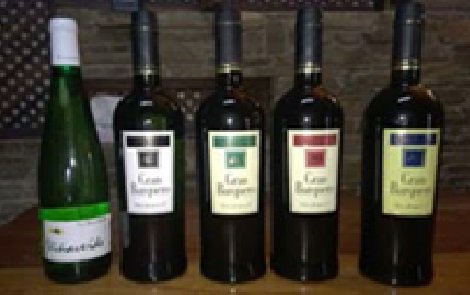 And Lagar Blanco see; www.lagarblanco.es (an excellent visit c/o Miguel Galvez junior), who explained the vinification process superbly and who later presented us with a lovely tasting of their wines, over lunch in their bodegas (as below): 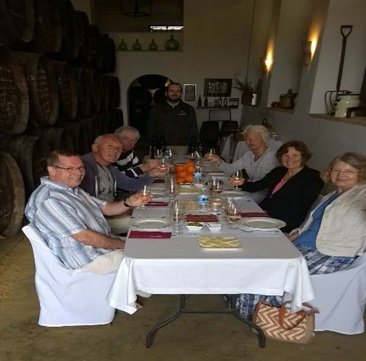 To provide an equal balance of visiting both wine and food producers, our visits to the above bodegas was interspersed by meeting Paco & Gonzalo Colin of Molino Juan Colin www.juancolin.com olive oil producers.

They produce three different styles of Extra Virgin Olive Oil from olives grown on their own trees, close to their offices and their adjoining production plant.

The picture on the right – shows Gonzalo pouring a sample of olive oil on a piece of bread (the best way of tasting olive oil)!

However, according to our party’s reaction, the main highlight in part 2, seemed to be our visit to an Iberian ham farm, on Thursday (21/04) in the Pedroches area, called Las Lagartosas, near Villanueva www.laslagartosas.es run by Lorenzo Higuera & Pura Medina.

Before going to the farm, we visited their retail store and maturation plant – Dr Keith Griffiths is seen here examining some maturing Iberian ham legs: 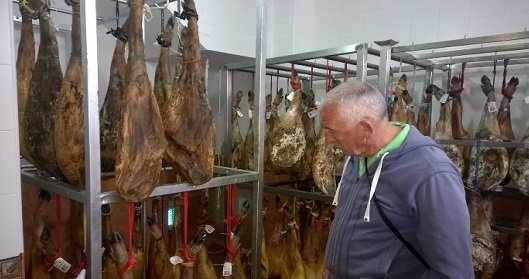 Once off the road, we shortly reached the approach to one of Europe’s largest areas of pasture, where Iberian pigs feed on acorns dropped from oak trees during August. To fully appreciate the flora and fauna and nature at its best, we walked about half a mile to the house, along the track bordered by a fence on one side – where beef cattle were grazing:

When we reached the gate to the house (on top of the hill, with superb panoramic views), Lorenzo hollered at the cows, who bellowed back at him knowing that this was their signal to move fields, via the top gate, so they gathered pace and moved in behind us, as we walked to the house.

Just before walking to the house – we caught a glimpse of some Iberian pigs in their feeding pen. 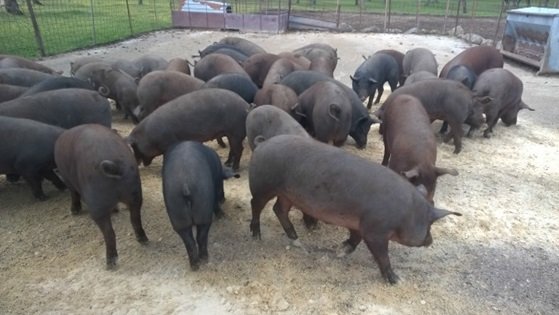 Having enjoyed our peaceful walk in bright sunshine, albeit a slightly cloudy day – refreshments awaited us!

The Iberian ham was accompanied by a tomato salad in olive oil, freshly grilled mushrooms stuffed with fried garlic, small roast potatoes and some bread – all washed down with a fruity white wine (from Bodegas Perez Barquero in Montilla) and a red wine from Ribera del Duero, made from tempranillo.

To finish, there were some finely sliced oranges (as above) in olive oil with the addition of a little sugar on top which was surprisingly tasty and very satisfying!

On our final day (23/04), initially in the Subbetica Natural Park, we walked with Rosa to Zuheros for about 1.5 miles, along a pathway mainly on level ground, but with a steep ascent at the end: 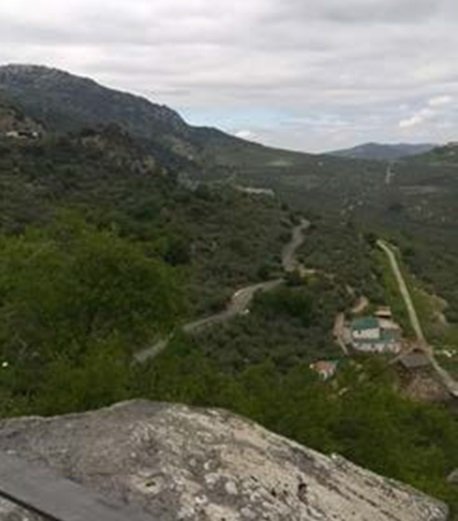 After our walk, our final lunch before travelling to Malaga was near Zuheros – starting with a cheese & wine pairing course:

Once in Malaga, Rosa and I joined Dr Mel Jones and friends for a farewell drink in the Parador Malaga Gibralfaro, located in the old quarter of the city on mount Gibralfaro – overlooking the town & bay:

We shall continue to offer these tours annually in April, but if you would like to go on a similar tour of Andalusia on dates of your choice – simply email us at admin@winesandtours.co.uk or call us on 0800 135 7982.